Team Building Activities Where Everybody Wins

Team Building Activities Where Everybody Wins

Running a fun team building event is often a hallmark of an organisation that’s doing well, values it’s people or both.

It’s becoming more common place for leaders to want something else, something more noteworthy from team building.

It might be that they’re trying to bring a new team together or that they need to get everyone working together more effectively; whatever the reason, they would rather something a little more refined than go karting.

There are lots of ways that team building can be tailored to support organisations in achieving their objectives.

And the winning team is…

A bit of fun competition is traditionally the default setting for any team building event – but is it always the right way to go?

When you want to say thank you, celebrate or just ‘show em that you love em’ – a bit of light competition is a fantastic idea.

In pursuit of the top spot there’s always lots of laughter and great memories created. The losers, invariably ‘robbed’, can mock protest before retiring to the bar.

If done right, team building should be an occasion and a chance to network and let your hair down.

Lose more than you win

The problems start when you use the same, competitive approach for a slightly more technical brief.

If you want to bring a team of 24 together to adopt new ways of working and collaborate more effectively, is splitting them into teams and forcing them to go head-to-head really helping?

In cases where teams don’t know each other well or there’s a message to get across, it might be more productive to aim to bring them together instead of pitting them against each other…

We’re all in this team together

When organisations want to bring a large team together why not forget competition altogether?

Team building that promotes working as a one big team, sharing resources and networking is plainly going to be far more effective than it’s competitive cousin at promoting the right behaviours.

Examples of this from our portfolio might be our Art Factory’s Big Picture activity or an adapted version of our Building Bridges team build.

Yeah ok, your super competitive ‘red’ individuals might grumble (you’ll know who we mean!) but the wider team is more likely to benefit. 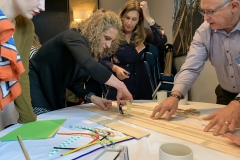 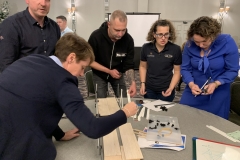 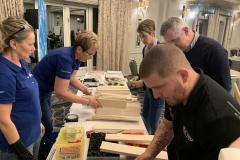 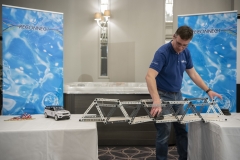 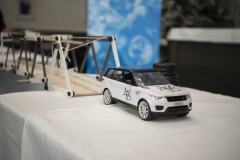 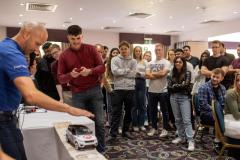 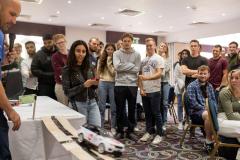 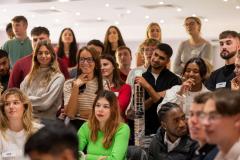 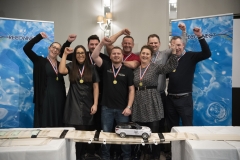 Our team against the world

Another approach to a more technical team building brief is the ‘competitive but not competitive’ format.

Simply put your entire cohort effectively competes against another company (either notionally or against their historic performance on a particular team building activity).

Nothing brings a tribe together more quickly than an external challenge.

In our experience, the performance levels achieved by supposedly struggling or new teams when they‘re competing against an industry rival have been nothing short of amazing.

We’ll often adapt our Crystal Maze for this. It’s popular so we have loads of historic performance data to pit teams against.

The final angle is to never actually mention that your team building activity isn’t a competitive one.

Give the cohort a collective goal they need to achieve in a set time, pop them in teams then sit back and see what happens.

Teams invariably trip up and launch into full, competitive behaviour, even if that means they begin to collectively fail.

Don’t forget to stop the team building activity halfway through and ask them what they think they’re doing… always a great moment!

A great one for this is our Lego Construction Project activity or the Junkyard Challenge.

Tailoring team building activities to your objectives is what we do.

Don’t get us wrong we LOVE a competitive, fun team building event but, if you need a bit more from an investment in your team than smiley faces and 30 hangovers, we’ve got your back.

Get in touch HERE to get started.

“EML were great to work with, really responsive & flexible. Our team was in need of some quality time together having been working from home for so long. Neil’s excellent facilitation helped us to learn more about each other, strengthen our connections, and build some shared goals in a really fun and safe way.”

Professional, knowledgeable and friendly team to work with from beginning to end. Thank you for making our day a great success!

You actually listened to the criteria I asked and followed up with a call to discuss options, out of 4 contacted no other company did that.

Really enjoyed working with Jon, Ruth and the team, exceptional customer service and support, would definitely work with you again.

Great day had a wonderful time thank you to all the team for making it such a successful event with many happy memories.

Very professional and engaging company to work with. Great ideas and energy on the day resulted in some excellent staff feedback.

Just a big thank you again for a brilliant date. So well organised from start to finish and the team on the day were all amazing. Everyone had a great time and the feedback has been brilliant.

We have had lots of positive feedback from many members of staff. They really enjoyed all the activities and felt that it allowed them to have fun and to get to know colleagues better. Thank you!

Brilliant facilitation, really understood our needs and worked with us to create something amazing. Feedback from staff has been really positive. They were engaged, and it really did support us in our messaging. Thank you!

Many thanks to Neil and Ruth for leading our virtual team building exercise... Many laughs were had while scrambling to collect the twenty items...!!! The Murder Mystery was my favourite and my team winning was the icing on the cake. The Haka showed how uncoordinated we are but the laughs ...just proves what an enjoyable experience we all had.

Our team really enjoyed the event - they are already asking when we can do another!

EML delivered a great virtual training afternoon for our new Graduates, Undergraduates & Apprentices. Everyone found it to be a fun and engaging afternoon.

Thanks for organising and facilitating our online Christmas social. I've had some great feedback from the participants and it was lovely to do something together even though we couldn't meet face to face.

Great fun had by all. Both inclusive and engaging. We will be looking to use EML again next year.